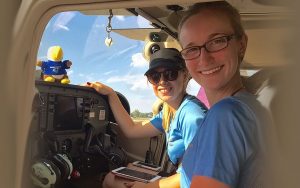 “Flying is obviously in the blood of these two talented young pilots. Aviation is also the lifeblood of the Machinists Union, and the Southern Territory is so proud to have them as part of our union,” said Southern Territory General Vice President Mark Blondin. “These two young Machinists put in many hours through training and sacrificed much personal time in pursuit of their dream. They have proven that through hard work and dedication, aspirations can become a reality. I am very proud to call them Sisters, and congratulate them on this success and in their future endeavors.”

The two women took home the $5,000 first-place prize and Bose headsets. Both Instructor-Pilots are earning degrees from Embry-Riddle.

“For me, it’s such an honor to fly with such fantastic aviatrix’s from across the country and even from around the world,” said Dillon. “Regardless of total hours, ratings, and certificates, everyone always has a piece of advice to take away.”

“This race has helped me become a more well-rounded pilot and a better instructor to my students,” said Pasmore, a graduate student who hopes to develop a career in ergonomics, or flying.

The Women’s Air Race Classic is a non-profit organization that works to promote and preserve the traditions set by pioneering women in aviation.