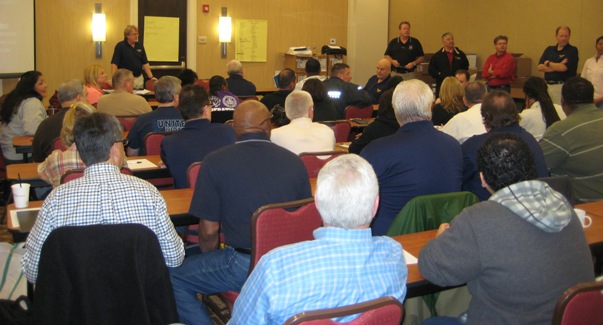 The IAM Transportation Department recently led a week-long organizing blitz of Delta Air Lines workers with more than 100 organizers from Local and District Lodges engaging thousands of workers with personal visits to their home and by telephone. More than 2,500 homes were visited in Delta’s home city of Atlanta alone.

“Locals in Detroit, Memphis, Minneapolis and Seattle reached out to thousands of Delta workers to answer their questions about the Machinists union and the election process,” said Transportation Coordinator Jay Cronk. “Teams of IAM organizers visited Delta workers throughout Atlanta, New York and Salt Lake City. In an overwhelming majority of cases, Delta workers welcomed the opportunity to speak with IAM representatives outside of their workplace. Delta’s use of fear and intimidation to prevent employees from learning about the IAM at work is widespread, but at home the employee is in charge and they are open to hearing about what the IAM has to offer.”

Harassment of union supporters by Delta officials was among the issues raised by workers, including how managers regularly question workers seen speaking to union representatives.

Another measure of the IAM’s success is Delta’s response. CEO Richard Anderson urged employees to call the police if they felt threatened by the IAM trying to speak with them. The IAM received no reports that anyone took this advice or felt threatened. To the contrary, many people reported that they felt relieved to be free to discuss the union for the first time.

“The IAM will speak with every Delta employee who has questions about the Machinists Union,” said District 143 President Stephen Gordon. “We are not intimidated one bit by Delta’s threats. In fact, so many Delta workers we visited signed the election request cards necessary to hold an election we intend to expand the home visit program to additional cities.”

More information about the IAM campaign at Delta is available at www.IAM4Delta.org.