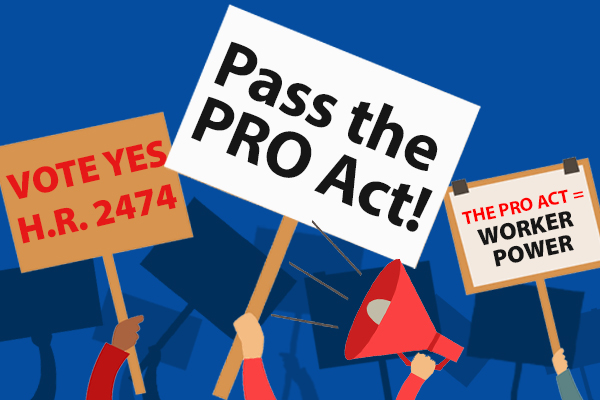 The House is likely to vote on the Protecting the Rights to Organize (PRO) Act next week.

The IAM is advocating for the PRO Act (H.R. 2474), which would eliminate so-called right to work laws and broaden workers’ rights to strike and organize. The bill, introduced in May by House Education and Labor Chairman Bobby Scott (D-VA), was approved in committee and now the IAM is pushing for a full House floor vote. U.S. Rep. Jared Golden (D-ME) led a strong letter of support, with dozens of his democratic colleagues, for the PRO ACT to the House Democratic leadership team.

The IAM also sent a letter to the House Democratic leadership team urging support for the PRO ACT.

“The PRO Act is a crucially bold piece of legislation that modernizes federal laws and establishes a process for mediation and arbitration to help the parties achieve a first contract”, said Machinists Union International President Robert Martinez Jr. “It protects a workers’ right to organize a union and bargain for higher wages and better benefits.”

TAKE ACTION: Tell your member of Congress to vote “yes” on the PRO Act

Congressional lawmakers say the legislation would drastically improve worker protections. That includes provisions such as: