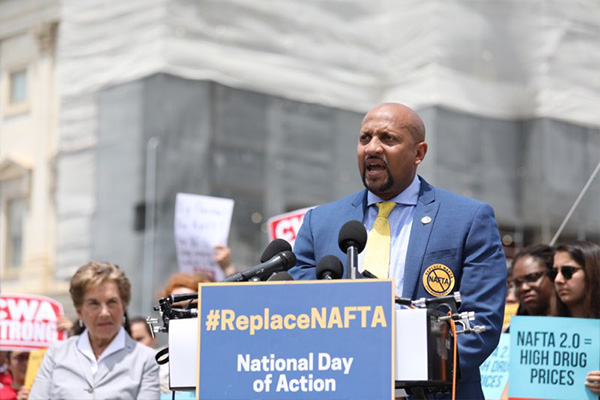 The IAM joined allies on Capitol Hill Tuesday to demand fixes to the renegotiated NAFTA and deliver a petition with hundreds of thousands of signers.

“We believe that NAFTA 2.0 does absolutely nothing to stop U.S. companies from moving our work to Mexico to take advantage of Mexican workers who do not enjoy fundamental human rights,” IAM Legislative Director Hasan Solomon said at the rally. “Let’s get NAFTA right this time—there is no reason to rush this agreement through Congress.”

“I’m here to remind you that 40,000 @MachinistsUnion members in the aerospace industry lost their jobs because of #NAFTA. Let’s NOT repeat history.”

The IAM has been engaged in NAFTA renegotiations since Day 1. Unfortunately, the deal does not go far enough to help working people in the U.S., Canada or Mexico.

“When it comes to directly curtailing outsourcing of U.S. and Canadian jobs to Mexico where workers do not enjoy fundamental human rights, little or nothing has been proposed with respect to manufacturing,” said IAM International President Robert Martinez Jr. “Outsourcing work in manufacturing industries such as aerospace, appliances, electronics, machinery, food processing, textile and apparels, and service industries, have apparently been ignored.”

Since NAFTA was enacted, more than 40,000 aerospace jobs have been created in Mexico. More than 300 aerospace companies are currently doing business in Mexico.

In testimony to a House Ways and Means subcommittee on trade this May, IAM Chief of Staff and Director of Trade and Globalization Owen Herrnstadt outlined three specific recommendations regarding labor enforcement in NAFTA 2.0:

–          Enforcement must be independently administered and monitored and provide swift relief and sanctions;

–          Labor obligations must be based on internationally recognized rights established by the International Labor Organization, an arm of the United Nations; and

WATCH LIVE: We on Capitol Hill with AFL-CIO, Rosa DeLauro and others to say no vote on NAFTA until it works for working people!