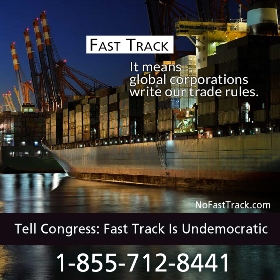 The IAM is continuing to sound the alarm to Congress on the grave danger of approving “Fast Track” trade authorization for the secretly-negotiated Trans-Pacific Partnership (TPP), a free trade agreement that will allow more of the same trade policies that have hurt working families for the last 20 years.

President Obama is asking Congress to grant the administration fast track authorization, which would limit members to a straight yes or no vote and prevent them from offering amendments to the deal.

Tell Congress to vote ‘No’ on Fast Track for the TPP.

“Negotiated behind closed doors and covering 12 Pacific Rim countries, the TPP is the largest free trade agreement ever negotiated and it goes far beyond traditional trade issues like tariff reduction,” IAM International President Tom Buffenbarger wrote in a letter to members of Congress. “While the text has still not been made public, leaked texts indicate that the TPP seeks to undue the financial reform measures of Dodd-Frank, end Buy American requirements and other governmental procurement practices, and undermine current U.S. regulations covering such areas as food safety, the environment, and patent and copyright law.”

Click here to read the entire letter urging members of Congress to reject Fast Track for the TPP.

The letter continues: “For working Americans, our corporate driven trade policies have meant the continual threat of outsourcing, stagnant wages, and declining living standards. This will not change until deeply flawed free trade agreements like the TPP are negotiated not in the back room, but in the light of day.”

The TPP negotiations are beginning to get more coverage in the mainstream media. On Tuesday, protestors interrupted a Senate hearing on TPP with U.S. Trade Representative Michael Froman.

“You are not telling the American people the truth!” shouted one woman, as she unveiled a banner with anti-TPP slogans.

“We believe in democracy, not secrecy!” yelled another.

Call 1-855-712-8441 now to add your voice to the stop Fast Track campaign or email your message: Tell Congress to vote ‘No’ on Fast Track for the TPP.

For more information on the TPP and Fast Track, visit the IAM’s Trans-Pacific Partnership page.