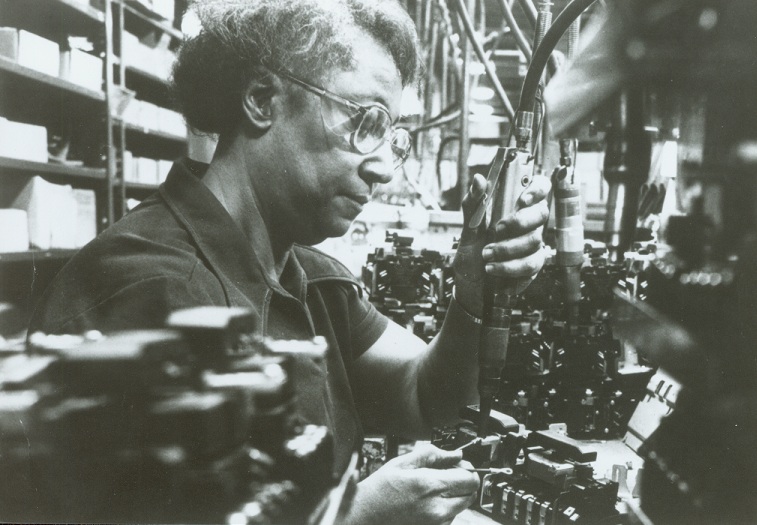 The IAM’s 125-year history has its share of noted human rights leaders and activists, but never before has the union’s rolls been graced by a woman quite like Ruth Waddell.

The kind, but unapologetic, local human rights activist was recently honored as a “History Maker” by the McLean County Museum of History in Bloomington.

When GE came to Bloomington in 1953, Ruth, a former house cleaner, took an employment test and was hired. She was the only African-American applicant at the time. For months, she waited for a call to report to work and watched as one-by-one, each of her white female counterparts were called into training. An increasingly frustrated Ruth called and visited the GE training center nearly every day to inquire when there would be a job for her.

After months of waiting, one Wednesday morning Ruth decided she had had enough.

“They always had an excuse,” she recalled. “I just went down there one day and I told them I’m going to put this chair here and I’m going to sit right here until you put me to work.”

Ruth was in training by Monday morning.

Though faced with racial discrimination throughout much of her early days, Ruth says she picked up the work quickly and never backed down.

Her husband, Oscar Waddell, also found employment at the GE plant, and the two of them played an instrumental role in integrating IAM Local 1000, which represented GE’s blue collar workforce. Ruth would visit various communities in the Bloomington area to organize. Oftentimes, she was the only woman. She served as Shop Steward for nearly 29 years.

“Everyone came across the factory to me because they knew I was going to fight,” said Ruth with a proud chuckle. “I didn’t take any guff. I’d get right up and go to that office and raise all kinds of sand.”

She credits her union job for helping her purchase her first home – made of brick, as she always wanted as a child – and for ensuring her secure retirement.

“The pension is good, Social Security is good and I’m in good shape. Real good shape,” she affirms.

Ruth received the City of Bloomington’s Human Relations Award in 2000. Both she and Oscar were active in the Bloomington-Normal Black History project.

After 50 years of marriage, Oscar passed away in 1990. Their daughter, Nancy, just celebrated her 68th birthday.

“Ruth’s story is one of triumph over racial discrimination,” said IAM Midwest Territory General Vice President Philip J. Gruber. “We are very proud of Ruth. She truly is a ‘History Maker’ as a human rights activist in the Midwest. In a year when we celebrate the 50th Anniversary of the March on Washington, there could have not been a better honoree than Ruth Waddell.”