IAM Retirees at Raytheon Win $2.5 Million in Back Pay 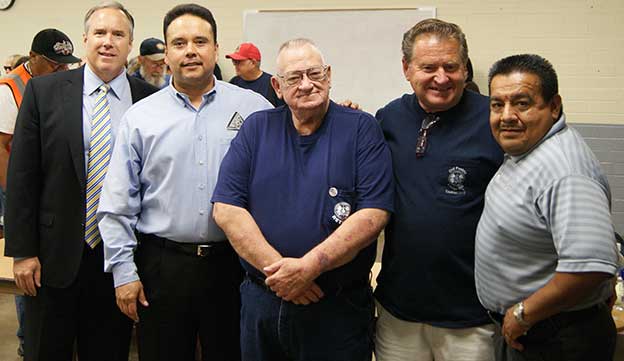 It was the long-awaited result of a class-action lawsuit against Raytheon, a multi-billion dollar American defense contractor that dragged out the legal process for almost 10 years.

“Some of the people who attended were children of those who have passed away before this process could be concluded,” said IAM Western Territory Chief of Staff Bobby Martinez, who was the Directing Business Representative of Local 933 in 2006 when the case initiated. “They had to receive what their parents should have received long ago.”

The dispute began in 2004 when Raytheon made unilateral changes to retirees’ healthcare benefits that were spelled out in the IAM/Raytheon agreement. On Jan. 22, 2013, a Ninth Circuit Court of Appeals hearing led to a settlement conference between the retirees and Raytheon which set the terms of the agreement. All retirees in the 2006 Alday v. Raytheon case were reimbursed by Raytheon 100 percent of the premiums paid after July 1, 2004 – the day when Raytheon began to breach the collective bargaining agreements that provided company-paid healthcare benefits for retirees and their spouses and dependents.

The final settlement in the 2009 Greene v. Raytheon case has yet to be finalized with discussions between the parties currently underway.

“It was our active retirees, especially those who volunteered to be class representatives, who made the difference,” said Local 933 Directing Business Representative Jim Watson.  “Their dedication, commitment and collective strength toward this effort gave us the edge, and justice prevailed.  Though we still have some work to do [on the Greene v. Raytheon case], there is no doubt that many retirees who suffered over the years now have a greater chance of enjoying their retirement.”

“I could not be more proud of the kind of representation provided to our retirees,” said IAM Western Territory General Vice President Gary Allen. “This is truly IAM representation at its best.  Congratulations to all the retirees and their families who fought long and hard to uphold the dignity all retirees deserve during their retirement years.  This is why we pay dues to have a strong union. Individually, not one of these retired IAM members and workers would have been able to pay the legal fees, but with collective bargaining and true IAM unity, great things are possible.”

Special thanks to the class representatives for both lawsuits; including David Lillie, Ron Geuder, Mark Argraves, Keith Gross, Frank Greene, Clare L’Armee.  Also a special thanks to retired Western Territory General Vice President Lee Pearson and all former and current members of the Executive Council and Grand Lodge staff who supported, and continue to support, this effort.

The IAM’s Old Pueblo Lodge 933 has represented the hourly workforce at Raytheon Missile Systems/Hughes Aircraft since 1952.