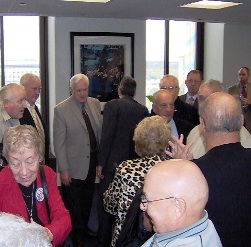 Dozens of IAM retirees marched on Capitol Hill last week, calling for health care reform that includes a robust public option without a tax on benefits.

The 55 U.S. and Canadian IAM retirees met with members of the House and Senate, including Senate Majority Leader Harry Reid, urging them to support comprehensive health care reform that helps insure 46 million uninsured Americans while improving coverage for the remaining 253 million Americans.

“Many of these retirees have health care benefits,” explained IAM Retiree and Community Services Department Director Cordone. “They are lobbying for other retirees, their children and grandchildren who do not have benefits.”

Cordone describes the retirees as “true heroes,” and notes the Canadian members were especially helpful in educating lawmakers on the effectiveness of Canada’s single-payer system.

“Our retired Canadian members are furious about the right-wing Republicans and insurance companies using scare tactics and spreading untruths about the Canadian health care system,” said Cordone. “Our northern Brothers and Sisters are very proud of their health care.”