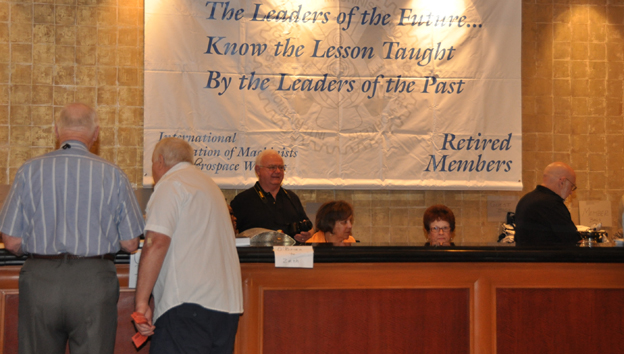 More than 1,000 IAM retirees took part in the 5th IAM Retirees’ Conference in Las Vegas, NV, where speaker after speaker urged the delegates to mobilize for the political battle to save Social Security.

Among those addressing the retirees was IAM International President Tom Buffenbarger, who welcomed the delegates as “members of the IAM family.” The retirees also heard from General Secretary-Treasurer Warren Mart, who updated the retirees on IAM organizing efforts and the fight to preserve jobs in the aerospace industry.

Retiree activist Susan Taylor summed up the sentiment of most of the attendees when she said, “We owe a debt to the brothers and sisters who came before and sacrificed so much. We can never allow their hard-won gains to be lost.” Retiree Larry Karpowicz added, “I was amazed at the amount of retirees attending the conference seeking information on Social Security, Medicare, health care, etc., and how the Retiree Department of the IAM can help them.”

“The entire conference could not have been a success without the many retiree volunteers who helped make certain that the conference operated efficiently,” said IAM Retirees Director Charlie Micallef. “We deeply appreciate everyone’s participation.”