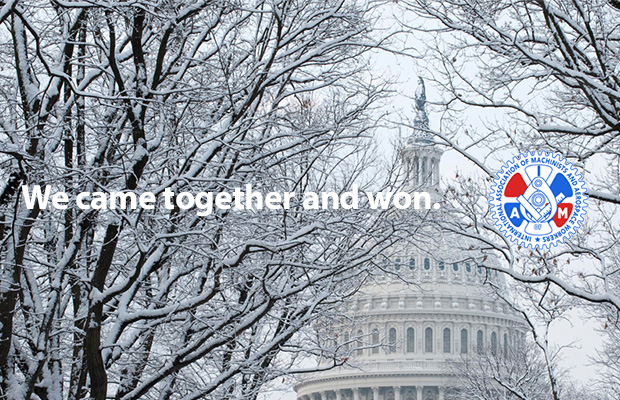 As IAM members from around the country mobilized, the International Association of Machinists and Aerospace Workers (IAM) scored a major political victory yesterday by including in the Aviation Innovation Reform Reauthorization Act of 2016 (AIIR) amendments that would mandate a minimum of 10 hours rest for Flight Attendants and make it a felony to assault a Customer Service Agent.

The IAM—the largest airline union in North America—and AFL-CIO transportation affiliates, worked around the clock to include the two amendments that will significantly improve the working lives of hundreds of thousands of Flight Attendants and Customer Service Agents in the United States.

“When Customer Service Agents are assaulted in the course of performing their duties or Flight Attendants do not receive appropriate rest, the safety of every passenger is placed in immediate jeopardy,” said International President Bob Martinez.

“I would like to thank every IAM member and the IAM Legislative Department who did a fantastic job and demanded that Congress do the right thing and improve the lives of Customer Service Agents and Flight Attendants,” said General Vice President Sito Pantoja. “This is yet another example of the fruits of unity, solidarity and direct action coordinated by Labor.”

The AIIR, or HR 4441, will now go to the full House and the Senate for an up or down vote. If approved by both chambers of Congress it will then go to President Obama for approval into law.

“The job isn’t done yet,” continued Pantoja. “We must remain vigilant and keep the pressure on to make 10 hours minimum rest for Flight Attendants and the assault amendment a reality.”

Updates will be provided as the legislative process moves along.