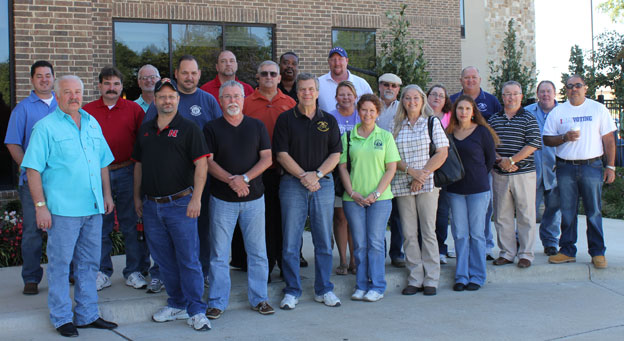 Members of the IAM Organizing Committee who successfully organized more than 1,000 mechanics, technicians and maintenance workers employed at the Red River Army Depot near Texarkana, TX.

The URS employees voted 61 percent for IAM representation on October 22 in a day-long election conducted by the National Labor Relations Board (NLRB).

“Times are changing, and workers are tired of stagnant wages and benefits,” said IAM Southern Territory Vice President Mark Blondin. “There’s a growing trend among workers in Texas and throughout the South who believe it’s time to stand up and time to get their fair share. The new members at RRAD deserve credit for looking beyond the anti-union rhetoric and focusing on the opportunities that only collective bargaining can provide.”

The campaign, started earlier this year by NFFE Local 2189 at Red River, became a joint campaign between Southern Territory, NFFE Local 2189 and District W-2. “This was a great collaborative effort within our territory,” said Blondin. “We had help from other Districts in the territory, who sent the very best organizers they had to house call the URS workers. Congratulations to Lead Organizer, Tommy Mayfield and District Lodge W-2 Directing Business Representative Kelvin Godwin for their successful campaign. We work as a team in our territory, and that’s how you win.”