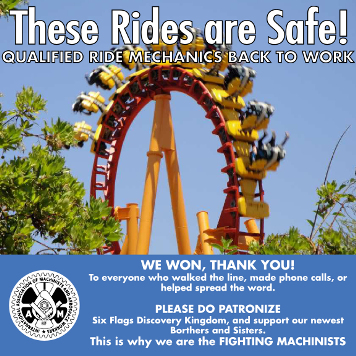 IAM Local 1546 Ride Mechanics at Six Flags Discovery Kingdom in Vallejo, CA are back at work after ending their strike and overwhelmingly accepting a new contract with park management. After being locked out since May 2, the agreement provides the 24 ride mechanics with more frequent and higher quality safety training.

The ride mechanics now encourage people to visit the park, which had potentially put patrons at risk by locking out the highly-skilled employees. The ROAR, a wooden roller coaster that reaches a G-Force of 3.5, broke down the day after the lockout, prompting emergency personnel to rescue patrons.

“Our ride mechanics and park-goers can now feel safe while they are at Discovery Kingdom,” said District 190 Business Representative Garry Horrocks. “We now encourage everyone to come enjoy a summer day at Six Flags Discovery Kingdom.”

The park will also reimburse the ride mechanics for the loss of health care coverage they suffered while on the six-week lockout.