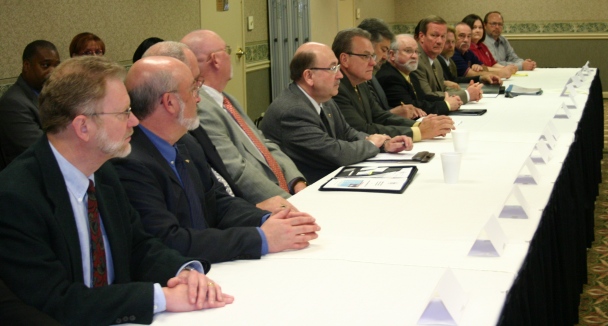 The opening round of talks between Machinists Local 839 and Spirit AeroSystems in Wichita, KS, is drawing favorable media coverage for both sides, who declared they are prepared to broker an accord that could serve as a new model for the aerospace industry across the country.

In ‘A New Kind of Contract,’ published today in The Wichita Eagle, leaders on both sides indicated they would consider non-traditional terms in an agreement that provides flexibility for the company and ensures job security for workers at Spirit.

The article quotes IAM President Tom Buffenbarger saying, “This is the contract that this union hopes very deeply will set the bar and set the stage for a new way of bargaining in the aerospace industry. Not just with Spirit, but we’re carrying the weight of an industry on our shoulders in these negotiations.”

Spirit AeroSystems CEO Jeff Turner is also quoted. “Clearly, a cooperative, peaceful relationship between labor and management is very important for the

long-term health of the company,” said Turner, who added that he believed “layoffs should be an absolute last resort” and that employees should “share the gain” in good times.

The union’s goal of a new bargaining model was summarized by Gary Chaison, the oft-quoted professor of industrial relations at Clark University at Worcester, MA. “The union is saying, ‘We don’t want to be the senior partner in failure and the junior partner in success,’” said Chaison, who suggested it was an approach Boeing should try.

Prior to the opening of talks, Buffenbarger, Turner and former Congressman Dick Gephardt met with the shop management team and union stewards. A video of the meeting and a Q&A will be available on the Local 839 website at www.ll839.org.