IAM Strategizes on Future of Work in South 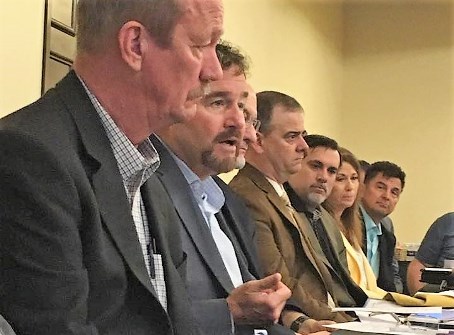 The South has become a haven for U.S. manufacturing and foreign investment. It’s easy to see why.

Without a union-represented workforce, corporations pay lower wages and provide less benefits. When a workplace is unionized, so-called right-to-work laws curb union power. Most politicians don’t say that overtly; they tout their “flexibility” and a “results-driven workforce.”

The same politicians leave taxpayers on the hook to pay billions of dollars in tax breaks to companies that often don’t pay fair wages.

But there’s reason to believe things are changing.

“We are working to redefine what it means to organize in the South,” says IAM Southern Territory General Vice President Mark Blondin.

In 2016, the IAM won 26 organizing campaigns in the region, bringing in 3,000 new members, reports Ted Reed in Forbes.

More than 50 IAM Southern Territory leadership and staff members recently met for two days in Biloxi, MS to strategize on how to build on that success.

“There’s hope there, if we do it right,” said Chuck Bennett, President of IAM Local 470 in Lake Charles, LA.

Blondin says the 14-state region is making a huge difference in the lives of working people in the South.

“I am so very proud of the leaders in this room,” Blondin said as he opened the summit. “You make the lives of working people in the South better each and every day. You make it happen for our members and the middle class, continuously protecting workers and their rights across the Southern Territory.”

The territory has recently ramped up efforts to organize federal and Service Contract Act workers, many of whom work at military bases scattered across the South. It’s reshaping and growing the IAM’s footprint in the South. The union was founded in an Atlanta railroad pit in 1888.

“This great union started in the South. We have roots here,” said Blondin. “The members in the Southern Territory want to make sure their Brothers and Sisters in the future will have that opportunity. That’s the motivation behind us looking for different and unique ways to organize in our Southern home.

Louisiana Local President Bennett says the strategies he has learned in the last two days are going to drastically change how he approaches organizing back home.

“We need to listen more. Not tell the working class in our communities what they need but rather listen to them and let them tell us what they want and need,” said Bennett. “You have to want it—to inspire you to organize. And now we can take all this home and start chasing those leads.”