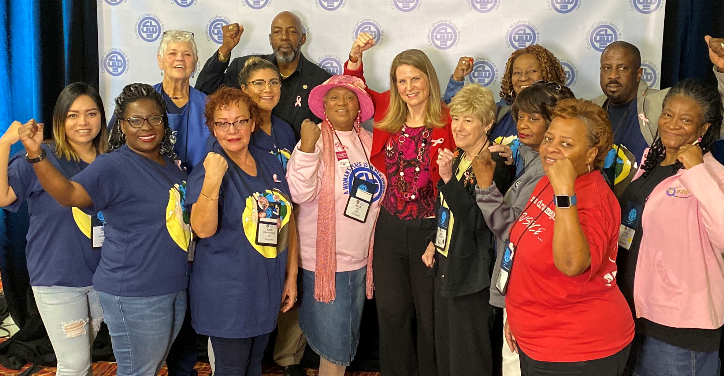 Nearly 25 Machinists Union members made their voices heard at the 20th Biennial Convention of the Coalition of Labor Union Women (CLUW) in Las Vegas last week. The theme for the convention was “Sisters Not Afraid of Power: Coming Together to Change the World!” Eleven members traveled from District 751 in the Seattle area of Washington State. Several of the attendees were first-time attendees and many hold positions in their local CLUW Chapters.

Many of the sisters spoke on various resolutions and proposed by-laws changes. Ariel McKenzie wrote an amendment to the climate change resolution to include job protection in the process of addressing climate change that was included in the final resolution.

Delegates heard from such speakers as AFL-CIO Secretary Treasurer, Liz Shuler, Dolores Huerta, United Farm Workers Co-Founder and Founder of the Dolores Huerta Foundation and Linda Chavez-Thompson, retired Executive Vice President of the AFL-CIO, among others. Founded in 1974, the Coalition of Labor Union Women is America’s only national organization for union women and has four goals: organize the unorganized; promote affirmative action; increase women’s participation in unions; and increase women’s participation in political and legislative activities. Members plan to meet again in the Spring at CLUW’s National Executive Board meeting.