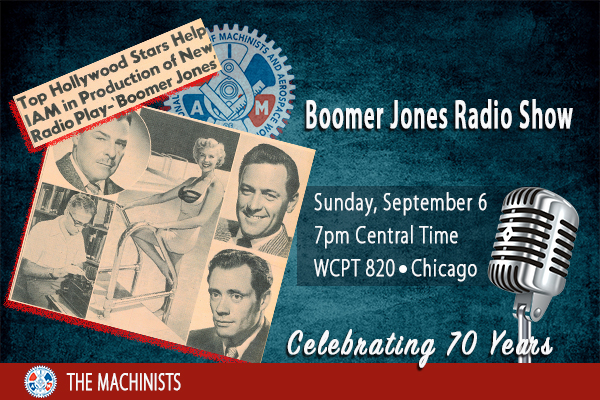 The IAM celebrated the 70th anniversary of its “Boomer Jones” radio show from 1950, by airing and streaming nationwide an encore performance on WCPT 820 in Chicago on Sunday. The program featured Hollywood stars William Holden, Marie MacDonald and Brian Donlevy, with commentary before and after from labor historian Charlie Micallef and Tanya Hutchins.

Listen to the show here.

Boomer Jones tells the story of union organizing, through the eyes of a machinist who learns the trade as an apprentice and later becomes a journeyman. The drama shows how he fought for a better life, despite getting fired and blacklisted. The IAM’s Midwest Territory sponsored the show.

“What a fantastic show,” said IAM Midwest Territory General Vice President Steve Galloway. “It’s very important for our union to celebrate our past and remember those who worked hard to spread the union message as with the Boomer Jones radio show. Stories of union organizing are just as relevant now as they were in the 1950s. A huge thank you goes out to Charlie Micallef, Tanya Hutchins and members of the Midwest Territory staff who helped bring this wonderful show back to the airwaves.”