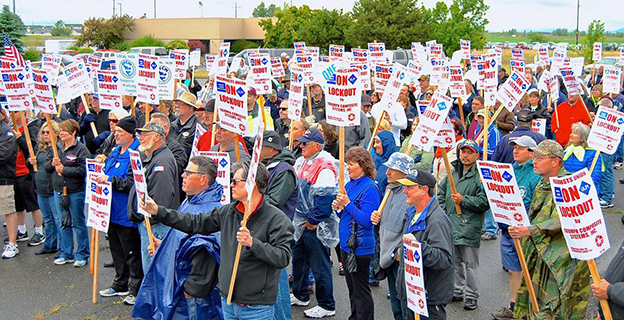 IAM District 751, Local 86 members and a wide range of supporters attend a “One Team Equal” rally on Friday, June 10 in Spokane, WA. About 400 IAM members have been locked out of their jobs at Triumph Composite Systems since May 11.

The IAM and Triumph Composite Systems, an airplane part maker in Spokane, WA, are coming back to the bargaining table. About 400 members of IAM District 751, Local 86 have been locked out of the plant since May 11, two days after voting down a concessionary offer from Triumph.

Federal mediators will help with the talks, but District 751 President Jon Holden is “keeping expectations down,” he told Bloomberg.

“The company has made public statements that its stance has not changed,” said Holden. “Their position has not changed on issues very important to our members.”

IAM members at Triumph are trying to keep their retirement security and eliminate a two-tier wage system.

“It’s not just about the money,” Helen Evans, an IAM member who works at the plant, told the (Spokane) Spokesman-Review. “It’s about treating people equally and not pitting us against each other.”

At a rally last week, Western Territory General Vice President Gary Allen commended members for refusing to “bow to the corporate dogs that have done this to us.”

“I want to send a direct message to the CEO of Triumph Corporation, Dan Crowley, and their board of directors, to get back to the table, sit down and negotiate a fair contract: a contract that our members deserve and that you owe them,” said IAM International President Bob Martinez during a recent visit to the picket line. “We’re looking forward to seeing you at the table.”