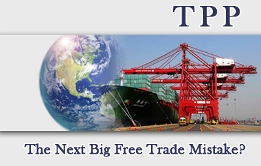 The Trans-Pacific Partnership (TPP) Free Trade Agreement is an overly-ambitious, extremely-flawed plan that must have congressional oversight, says IAM International President Tom Buffenbarger in a recent letter to House members, urging their support of Reps. Rosa DeLauro’s (D-CT) and George Miller’s (D-CA) letter to President Obama demanding an end to the “fast track” process being used to ratify the TPP agreement.

“Fast track” is a ratification process that effectively strips free trade agreements (FTAs) of congressional oversight and only requires an up or down vote for passage.

“Historically, Congress has relinquished its Constitutional authority over trade for the most egregious FTAs like NAFTA,” wrote Buffenbarger. “Most recently, ‘fast track’ was used to pass the Korea-U.S. FTA. The FTA with Korea was sold on the promise of expanded exports to that country. Unfortunately, our worst fears have been realized. Not only have imports from Korea increased, but our exports to Korea have fallen in every month since the passage of the FTA. An expanding trade deficit means a loss of American jobs, which, at a time of historically high unemployment, we cannot afford.”

Buffenbarger describes the TPP as one of the most ambitious FTAs ever negotiated by the U.S.

“The TPP goes far beyond tariff reduction and seeks to undo the financial reform measures of Dodd-Frank, end Buy American requirements and other governmental procurement practices, and undermine current U.S. regulations covering such areas as food safety, the environment, and patent and copyright law,” said Buffenbarger. “While the TPP covers a broad swath of nontariff issues, it would not require countries that lack labor rights, like Vietnam, to end their authoritarian human rights abuses.”

“In 2008 President Obama ran on the promise of a ‘new day in trade,’” continued Buffenbarger. “So far our trade policy has been the same old nightmare with rising corporate profits and the loss of U.S. jobs and a decline in living standards for ordinary Americans. I strongly urge you to sign on to the DeLauro-Miller letter.”

Click here for a full copy of Buffenbarger’s letter, as well as the DeLauro-Miller letters to the House and president.