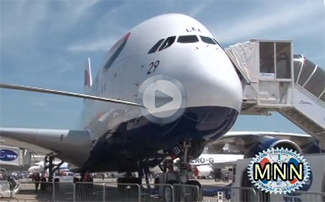 A new video on the Machinists News Network showcases labor’s presence at the 2013 Paris Airshow as an IAM delegation led by members of the Executive Council stood in solidarity with unions from across the world.

In a special labor conference organized by the newly-formed global union IndustriALL, IAM leaders marked the contributions of thousands of highly-skilled workers to the aerospace industry, while emphasizing the importance of labor unions working together to secure labor’s place at the bargaining table.

“The success of our conference will be measured by how well we can dismantle the barriers that global aerospace companies have erected to keep us all apart,” said IAM General Vice President Mark Blondin. “And our success can be measured by how soon we can actually organize together, how soon we can actually bargain together and if we have to, actually strike together.  The day we form this solidarity is the day we can bring justice and dignity to all aerospace workers around the world.”

It was an opportunity to ask the tough questions necessary to secure a future for the next generation of aerospace workers.

“They never dreamed that we could be in the same room, talking the same talk, sharing info with one another so that we can build a common understanding, which is necessary to begin building a common strategy,” said IAM Trade and Globalization Director Owen Herrnstadt. “We as aerospace workers need to be putting pressure on our own governments and trade negotiators to make sure we are in the room and that they understand what we expect out of any trade deal that comes down.”