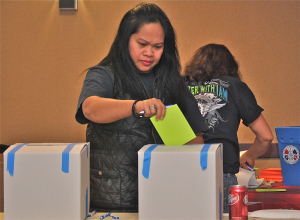 IAM members at Auto Truck Transport (ATT) won a three-year battle to halt improper outsourcing of their work by the company. The settlement, which includes more than $1.3 million in damages, covers more than 600 members of Locals 641 in Cleveland, NC, and Mount Holly, NC; Local 166 in Laredo, TX; and District W24 in Portland, OR.

After intense negotiations and initial resistance by ATT, the IAM and ATT reached a settlement agreement where ATT will follow the terms of the arbitration award, including halting outsourcing and improper work assignments, contribute $1.3 million into a settlement fund for drivers, give drivers a $1,000 incentive payment and agree to implement other terms to make drivers whole.

The victory comes after the IAM filed an initial grievance against ATT’s conduct in 2011 and then won an arbitration award in early 2014. The arbitrator upheld the IAM’s claims and ordered ATT to stop the improper outsourcing and changes to work assignments, pay IAM-represented drivers back wages and benefits, restore any seniority lost, pay monetary damages and other remedies.

Even after the arbitrator’s stern rebuke of ATT’s conduct, the company continued to stall on implementing the terms of the award. Under the ATT/IAM contract, IAM-represented workers have the right to strike if the company fails to follow the terms of an arbitration award. The IAM filed a lawsuit to force ATT to comply and members prepared to strike. The IAM and ATT reached the agreement in April 2014.

“Our members held strong and made ATT live up to the terms of our contract and the arbitrator’s award,” said IAM Automotive Coordinator Boysen Anderson. “A special thanks goes to everyone who made this victory possible. This is a huge win and it proves that solidarity and a strong IAM contract are invaluable in today’s economy.”