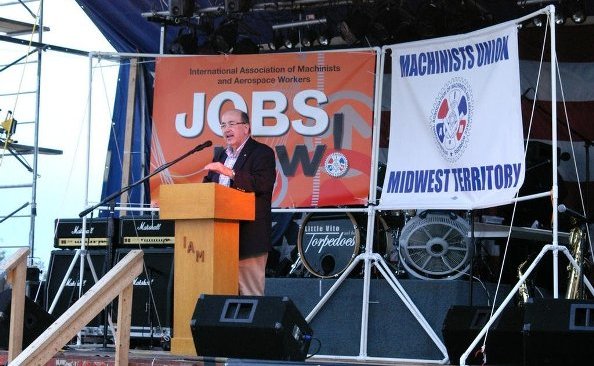 To honor America’s working men and women and to highlight the severity of the current economic crisis, the IAM joined with the Wisconsin State AFL-CIO, United Auto Workers Local 95 and the Rock County Labor Council for a “JOBS NOW” rally this past weekend at the Laborfest Grounds in Janesville, WI.

“The same economic situation and jobs crisis is evident in every Midwest state,” said Midwest Territory GVP Philip J. Gruber. “The Midwest states have lost over one million manufacturing jobs in just the last 10 years. The job loss numbers triple, if you include the states of Michigan, Ohio, Kansas and Colorado.”

JOBS NOW! is the IAM’s rallying cry for comprehensive strategy to put millions of unemployed Americans back to work immediately, utilizing a second stimulus package, the crafting of a national industrial policy to revitalize the manufacturing sector, investing in our transportation infrastructure and providing more skills training.