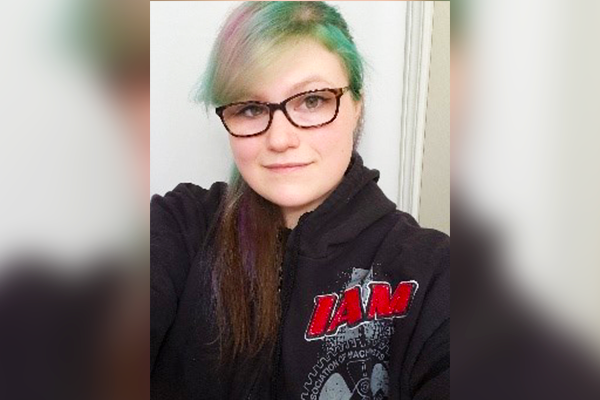 Katie Eagleson, only 20 when she joined the union, has held many different positions at IAM Local 751F. She has been a communicator, auditor, secretary-treasurer, district council alternate, and she currently serves as a shop steward and recording secretary. Eagleson comes from a union family, watching her dad, also a union member, go to local lodge meetings and helping at fundraisers with him.

Eagleson credits many who have influenced her along the way. She admires Terri Myette, also a member of IAM Local 751F. She feels they both have a lot of drive and conviction for the union, both are very family oriented, and don’t back down.

Eagleson says Myette has always met her with compassion and facts. Eagleson also admires District 751 Directing Business Representative Jon Holden, who is always cool and calm under pressure, personable, and has always been willing to answer any questions she has.

“District 751 is steering the path for developing and mentoring women into our union leadership,” said IAM Western Territory General Vice President Gary R. Allen. “I am honored to have a great young leader like Katie chart the course for women in the IAM.”

“I got to meet our General Secretary-Treasurer Dora Cervantes when I attended class at the Winpisinger Center, and through our conversations she gave me encouragement and guidance on how far I want to go as a union leader,” said Eagleson.

Eagleson says her dad, Rob Eagleson, has given her the drive and passion to support the membership.

She has faced obstacles ranging from being young and starting a family. Eagleson says she thinks people thought she would take a step back to care for her children, but that wasn’t the case, because her IAM Sisters and Brothers have been incredibly supportive and love her children. They love seeing her and her children being involved with the union.

“I have two daughters and I also want to set an example for them,” said Eagleson. “It isn’t always easy.”

Her advice is to get involved in the IAM.

“For every reason you think you have not to, there are five more reasons to do it,” said Eagleson. “Bring your children with you. Our membership is so family oriented and will welcome them. Get in contact with your local president, vice president, or recording secretary and we will help you figure out how to get involved. I hope that more women join the labor movement and say yes to getting involved. Don’t let the fear of striking out keep you from playing the game.”