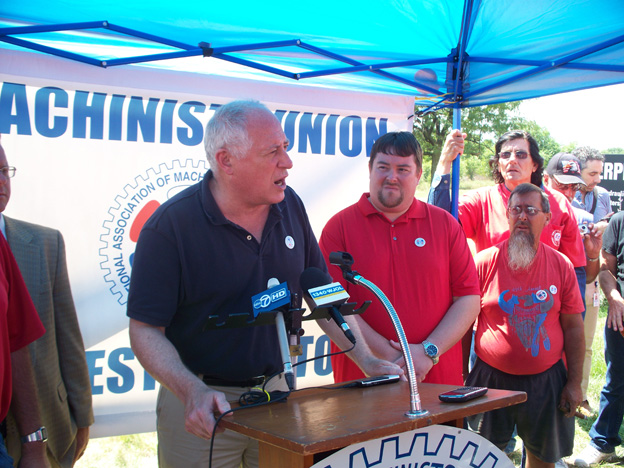 Illinois Democratic Gov. Pat Quinn visited the IAM picket line at Caterpillar Corp. in Joliet, IL and contributed $10,000 to support the members of Local 851 who have been on strike for a fair contact since May 1.

After 14 weeks, the picket line outside the Caterpillar gates in Joliet, IL is becoming a showcase for solidarity and support, with recent appearances from Democratic Sen. Dick Durbin and Illinois Governor Pat Quinn, who contributed $10,000 to the Local 851 strikers.

Click here to view an IAM video of Gov. Quinn on the picket line.

“The Governor couldn’t have picked a better time to come out and show his support for all of these workers,” said Midwest Territory GVP Phil Gruber. “If we had more governors like Governor Quinn, this country would be in a lot better shape today.”

Like last year’s assault on public sector workers in Wisconsin, the contract proposed by Caterpillar contained sweeping changes, including the elimination of basic seniority rights and severing future members from participating in the traditional defined benefit pension plan.

Perhaps the most offensive proposal, and certainly one reason the contract was overwhelmingly rejected not once but twice, was the proposal by Caterpillar to establish a variable pay scale for some employees, based on a “market based” formula to be determined by Caterpillar.

Caterpillar claims the floating pay rate for employees is necessary to enable the company to compete globally.

The need for so-called competitive compensation does not, however, extend to senior management at Caterpillar.