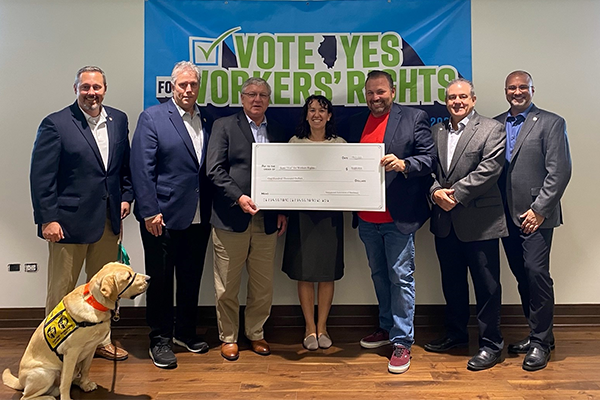 IAM Districts and Locals in Illinois have raised $100,000 to support an Illinois constitutional guarantee of workers’ rights to organize and bargain collectively. The Illinois Workers’ Rights Amendment would be one of four such guarantees enshrined in state constitutions, but Illinois Amendment 1 goes a step further than other states by also banning anti-union “right-to-work” laws.

The IAM is joining the Illinois AFL-CIO and legislative allies to promote the passage of the pro-worker ballot initiative, which will be on the ballot for Illinois voters on Nov. 8, 2022. To amend the state constitution, 60% of voters will need to vote “yes.”

The proposed amendment would add a new section to the Illinois Bill of Rights guaranteeing workers the fundamental rights to organize and bargain collectively and to negotiate wages, hours and working conditions. It would also prohibit any law from being passed that interferes with, negates, or diminishes the right of employees to organize and bargain collectively over their wages, hours, and other terms and conditions of employment and workplace safety.The pro-worker efforts under Illinois Democratic Gov. JB Pritzker are in stark contrast to former Republican Gov. Bruce Rauner, who failed in his effort to pass a statewide anti-union “right-to-work” law to weaken unions in 2015. At that time, Rauner declared that Illinois cities, counties, towns and villages could enact “right-to-work” laws. State courts threw that measure out.

“IAM members in Illinois, along with our allies in labor and state government, are leading the charge to make the state more worker-friendly,” said IAM Midwest Territory General Vice President Steve Galloway. “It’s our hope that other states will also make efforts to put workers’ rights at the forefront of their state constitutions.”