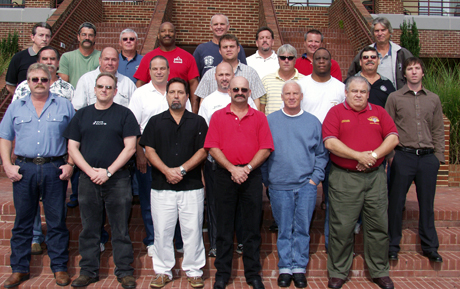 The master agreement was overwhelmingly ratified on Nov. 9 by members in all locations and provides for annual wage increases of five percent, four percent and four percent over the term of the 42-month accord. In addition to improved pay and a long list of benefits, members will receive an $80 pension multiplier and lump sum ratification bonus of $3,000.

An additional benefit of the master agreement is the common expiration date for all locations, allowing for a more coordinated approach to future negotiations and giving members and their representatives the leverage and benefits of increased bargaining unit size.

Before negotiations began, the 23-member IAM-ULA Negotiating Committee took part in a week-long Negotiating Preparations Class held at the Winpisinger Center, where representatives developed strategies and proposals that would be used when face-to-face negotiations began. More than 20 negotiating committees have gone through the Negotiations Prep training at the WWW Center since the program was launched in 2006.

“I would like to thank the staff of the Winpisinger Center for facilitating the initial training and structural development of this very diverse negotiating committee,” said Aerospace Coordinator John Crowdis. “The tools, techniques and training were second to none and a real tribute to what can be achieved when non-traditional methods are necessary.”

Machinists at Vought Focused on Pensions

Federal mediators in Nashville, TN, met separately for several hours on Wednesday with representatives of Vought Aircraft Industries and IAM Local 735 before determining that Vought was not prepared to address pensions, the key issue in the seven week-old strike.

“This strike was triggered when Vought tried to walk away from its pension obligations,” said Local Lodge 735 President Mike Worrell. “It will be resolved only when Vought responds to the very legitimate concerns of its workforce.”

While the position of the company was not a surprise, IAM negotiators were stunned to learn that company representatives arrived at the meeting accompanied by armed guards who remained in the room while the company met with mediators.

“This was certainly an insult to the workers at Vought, who have conducted a peaceful strike in the face of outrageous tactics by Vought management, including the use of strikebreakers,” said Worrell. “This shows a complete lack of respect for their workers who have given years of loyal service to this company.”

While Vought representatives were busy alienating themselves from their workforce, participants at the International Metalworkers’ Conference in Hamburg, Germany, were voting unanimously to support the IAM and members of Local 735 in their fight for fair wages and benefits. “Union representatives from Airbus and its suppliers at this meeting stand with the IAM in its fight for fair wages and benefits at Vought and call on the Company to return to the bargaining table for an immediate and satisfactory resolution of this dispute,” said the IMF resolution.

Additional information about the strike is available at www.iam735.blogspot.com.

The move by Delta is the latest indication of the tactics the airline plans to employ as part of a campaign to sow dissent among represented and non-represented employees before union elections occur at the combined carrier.

In a memo to all employees, but clearly directed at union-represented members at Northwest Airlines, Anderson wrote: “For those of you who have just joined the Delta family… we are not allowed to apply our pay policies until representation issues are resolved. So, in the meantime, you will continue to have the pay provided for in those agreements.”

“We expect our members to receive wage increases at the same time and in the same amounts as comparable Delta Air Line employee groups,” said District 143 President Stephen Gordon in a letter to CEO Anderson. “I hereby clarify that nothing in the collective bargaining agreements prevents management from raising our members’ salaries above the minimum rates.” 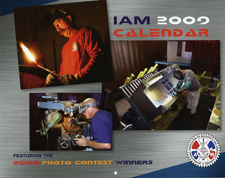 Local and District Lodges can order bulk quantities of the 2009 IAM Calendar, featuring winners of the IAM Photo Contest. Calendars are an excellent way to showcase the IAM in the workplace. Also, two dollars from the sale of each calendar goes to the IAM-sponsored charity, Guide Dogs of America.

All Lodges that order 100 or more calendars get a price break from seven dollars to five dollars per calendar.

Former District 19 President and Law Committee Secretary Bob Reynolds will make an appearance in an upcoming Life in the Wild episode on the Versus network. A life-long hunter and outdoorsman, Reynolds joins program host Ken Barrett in south Texas to hunt Nilgai, a species of antelope introduced to the Southwest over 75 years ago.

The TRCP’s Union Sports Alliance (USA) is a coalition of the nation’s leading conservation organizations, labor unions and individual hunters and anglers —all dedicated to fulfilling a joint promise to “Guarantee All Americans a Place to Hunt and Fish.”