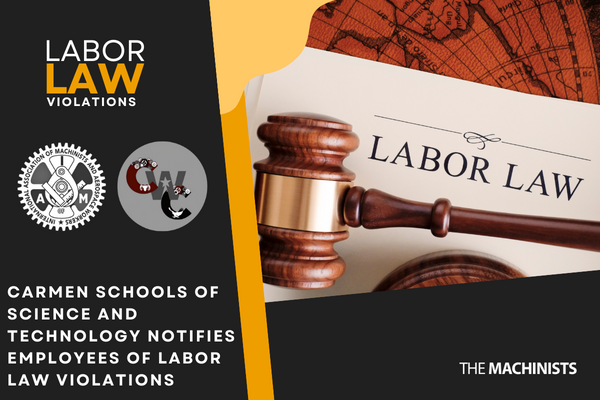 At the end of the 2021-22 school year, the International Association of Machinists and Aerospace Workers (IAMAW) District 10 filed Unfair Labor Practice charges with the National Labor Relations Board (NLRB) against Carmen Schools of Science and Technology for labor law violations stemming from their staff’s attempt to organize a union earlier this year. As part of a settlement reached with the NLRB and the IAMAW, Carmen Schools of Science and Technology must notify current and former workers of Unfair Labor Practice violations made by representatives of the school during the course of the unionization effort.

The settlement upholds IAMAW’s allegations that Carmen violated its employees’ labor rights. The violations include forcing staff to attend captive audience meetings, interfering with their staff’s right to engage in concerted action, making illegal anti-union statements over the course of the election, and making retaliatory threats that forming a union will decrease employer flexibility in wages and benefits. In January 2022, Carmen management hired a labor attorney to direct an anti-union campaign at its six school campuses. In March 2022, Carmen staff voted 79 to 59 against unionizing.

“I personally witnessed school administrators harass and intimidate union supporters,” said former Carmen teacher Leland Pan. “On my campus, women of color in particular were retaliated against for standing up for our students. I’m glad to see the truth come out and wonder if the election results would have been different without these underhanded tactics by Carmen administration.”

Teachers and support staff from across Carmen’s six schools formed the Carmen Workers Collective (CWC) to address multiple workplace problems, including unacceptably high levels of staff turnover, burnout, low pay, safety concerns, and the lack of teacher input in decision making. At Carmen’s Northwest High School campus, only four out of approximately 40 staff members from the bargaining unit chose to return to Carmen for the 2022-23 school year.

In exercising their right to form a union, the staff at Carmen Schools had hoped to achieve a negotiated contract that would address numerous workplace issues impacting Carmen students. The Carmen Workers Collective believes that teachers’ workspaces are their students’ learning spaces and that students benefit when their teachers are given the support and respect they need to do their jobs. Their four core goals are: equity, a sustainable workload, transparency and accountability, and financial fairness. Despite the outcome of the election, CWC hopes that Carmen will make the changes staff and students sorely need.

The International Association of Machinists and Aerospace Workers (IAM) is among the largest industrial trade unions in North America and represents nearly 600,000 active and retired members in diverse industries including aerospace, transportation, manufacturing, shipbuilding, and woodworking.

You can view the full release here.