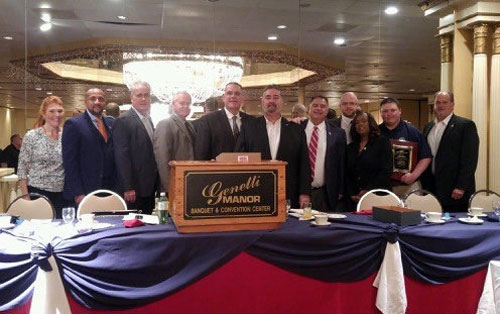 IAM District 1 has won the Cents-Per-Member MNPL Award nine years running, and are attempting to make it 10. The district held their 25th annual Stewards and Officers Appreciation Dinner recently at the Genetti Manor Banquet and Convention Center in Dickson City, PA. They raised over $60,000 for the Machinist Non-Partisan Political League (MNPL).

In addition to being a fundraiser, the dinner is also way for the district to thank Stewards and Officers for their hard work and dedication to their union. The district also picks a deserving person from the ranks of stewards and local offices to receive the District Man of the Year Award. This year’s honoree was the Local 321 member James Myers, the Chief Steward from Bowhead at Letterkenney Army Depot.

“I’m very proud of the commitment the brothers and sisters at District 1 have to MNPL, and working to ensure labor-friendly politicians get elected,” said IAM International President Bob Martinez. “Nine years in a row is an amazing accomplishment.”