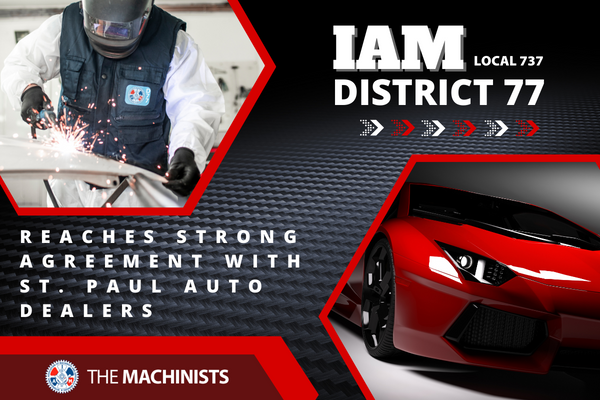 The agreement contains many highlights, including wage increases each year of the contract: 6% in year one and 2% in years two and three. It also lays out a new warranty premium pay system with increased rates and adds two paid sick days per contract year. The employers increased their contribution to the Joint Health Trust Fund and increased the tool insurance coverage. The contract also readjusted wage rates for lower classifications and adopts the IAM National Pension Fund Preferred Schedule Rehabilitation Plan.

With this contract, there is only one job class with wages under $15 an hour.

“This is another great contract out of District 77 with wage and benefit increases,” said IAM Midwest Territory Vice President Steve Galloway. “The IAM Local 737 Bargaining Committee, along with Assistant Directing Business Representative John Duerscherl and Directing Business Representative John Steigauf, put a lot of time and effort into getting a solid contract with protections for retirement. Congratulations to them and the entire Local 737 membership.”