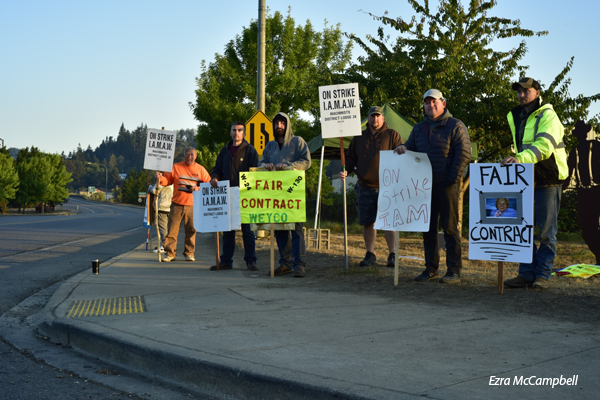 Building and Wood Workers’ International (BWI) sent a letter of solidarity to IAM District W24 members who have been out on strike against Weyerhaeuser Timber Company for six weeks.

In the letter, BWI pledges their support of the striking North American woodworkers’ fight against Weyerhaeuser’s unfair management.

“When we learned the way the Management of Weyerhaeuser thinks that they can treat you and the fellow workers that have brought with your labour so much profit to the company and their last concessionary offer in which they propose to cut vacation time, increase the cost of your health insurance with a very meagre increase in wages, we understood your anger and we felt the need to express our solidarity on behalf of all our members with your struggle,” reads the letter from BWI.

Building and Wood Workers International is a Global Union Federation that represents 12.5 million workers in the construction and wood working sectors. The Machinists Union is one of 375 unions that comprise BWI and have always played an important role in the Federation. Mike Rose, Chief of Staff for IAM’s Woodworkers Department, is BWI’s North American Regional Vice President.

“We whole-heartedly appreciate the offer of support and solidarity from our BWI brothers and sisters from across the globe,” said IAM Western Territory General Vice-President Gary Allen. “Our woodworkers are asking Weyerhaeuser for a contract that brings dignity and respect to their work; workers all over the world resonate with this struggle, and global solidarity is proof of that.”

“We wish you all the best and be assured of our solidarity and that we will do whatever we can to support you in the struggle for a fair contract at Weyerhaeuser that will honour your justified demands, restores decent work and dignity to all workers,” writes BWI.

The letter is signed by BWI General Secretary Ambet Yuson.