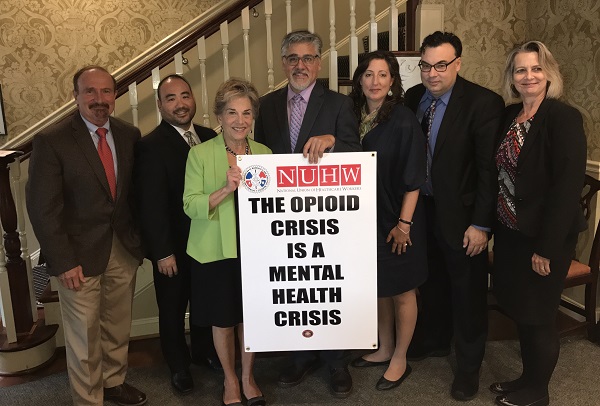 The opioid crisis is a national emergency, roughly 64,000 Americans died from drug overdoses in 2016. This emergency has cost our nation nearly 80 billion per year, much of which is attributable to lost earnings and employment. This crisis devastates the lives of working families.

Members of the IAM Legislative Team and National Union of Healthcare Workers (NUHW) recently visited Washington, D.C. to lobby on the opioid and mental health crisis. The week began with Rep. Tim Ryan (D-OH) taking part in a discussion with NUHW on the opioid epidemic. NUHW is advocating for the extension and expansion of funding to address the opioid crisis that threatens our nation.

“Frontline healthcare workers across the nation are attempting to fight the opioid epidemic,” said NUHW President Sal Rosselli. “The National Union of Health Workers is fighting for legislation that recognizes that the opioid crisis is a mental health crisis and the need to devote greater resources to mental health care.  NUHW members  will continue to hold profit-driven healthcare corporations accountable to the public interest. Our mission is to improve the lives of caregivers and patients, so we will continue to pressure elected officials to make good on the promise of parity for mental health and addiction services guaranteed under federal legislation.”

“I have never met a baby that does not love their parents despite all they’ve gone through”, said Jackie Schalit, a NUHW member and marriage and family therapist. “And I have never met a parent struggling with addiction that doesn’t want different for their baby. They know that it is a painful, grueling process and they want to change the pattern in their family. We call all do better. The kids deserve better and the families deserve better.”

NUHW members along with the IAM legislative team will continue to address this national emergency and lobby elected officials.

NUHW is a member-driven, democratic union that represents 14,000 healthcare workers.