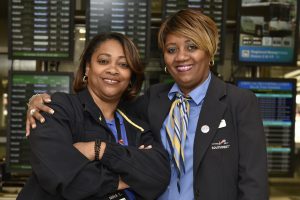 When a TSA agent or law enforcement officer is assaulted at an airport, it’s a serious federal crime. And rightfully so, since we’re counting on them to keep us safe.

But airline gate and ticket agents, who also have critical security functions, are not currently protected by federal law, even though they control access to aircraft.

Across the country, Airline Customer Service Representatives are being physically assaulted on a daily basis. They’ve been kneed and punched in the face, struck by luggage thrown at them and had their clothes ripped. In some cases, injuries have been life-altering.

Tell your member of Congress to sign onto a letter demanding stricter penalties for assault against Airline Customer Service Representatives.

The IAM and a coalition of airport worker unions support a letter from U.S. Rep. John Garamendi (D-CA) urging DOJ and DOT to give Airline Customer Service Representatives the same protection from assault as TSA agents and law enforcement personnel.

Help protect Airline Customer Service Agents from assault by telling your members of Congress to sign on to our letter.