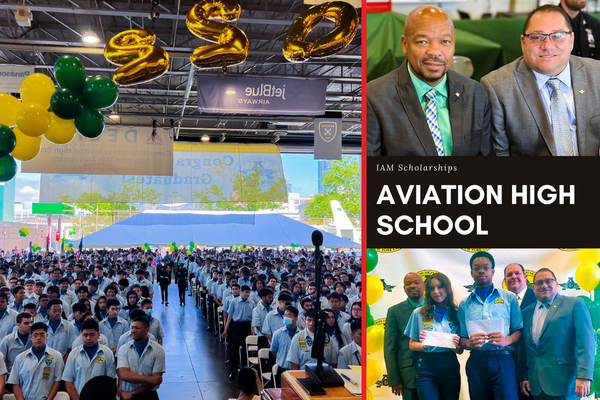 Aviation High School recently held its annual graduation ceremony, the first in-person event since the pandemic. 480 students received their high school diploma, with many earning their Airframe and Powerplant licenses certifying them to work as mechanics in the airline industry.

This year, the IAM awarded four tool boxes and two scholarships to graduates. There were several other airline representatives and sponsors that presented the graduates with donations and prizes, but the IAM remains the only labor organization that awards students with scholarships and toolboxes for their educational achievements.

“It was an honor to be in attendance,” said IAM Air Transport Territory General Vice President Richard Johnsen. “It’s rewarding knowing all the students have accomplished in this program already. Knowing they will be better prepared for the next step in their lives is priceless.”

Aviation High School, a New York City public school, has an incredible 93% graduation rate and many graduates have expressed a desire to work in the airline industry and become IAM members.

The IAM has enjoyed a long partnership with Aviation High School and SUNY Empire State College (ESC) and now a new partnership was recently developed with the help and support of the IAM, the United Federation of Teachers, and the American Federation of Teachers. Visit the SUNY Empire State College website to learn more about this new and exciting program.