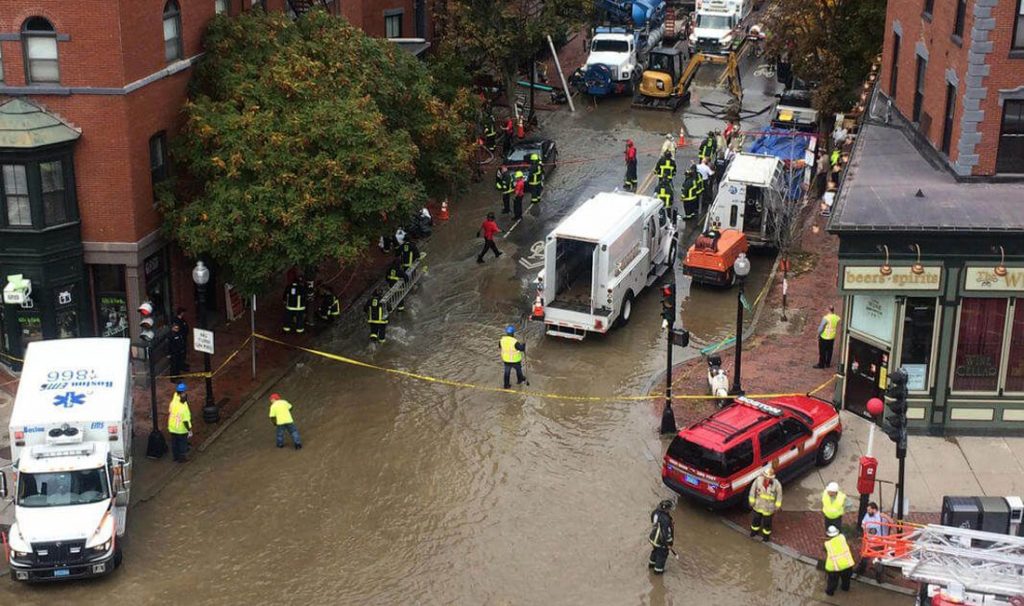 “It went from nothing to a flood,” a witness said.

A water main had burst at a construction site in Boston’s South End. The trench around it was quickly filling with water, overflowing onto the street and beginning to cave in.

Down the street, Billy O’Brian and his 14-member crew, IAM Local 100 (District 15) members who work for Boston Water and Sewer, were finishing up a different job when he got an emergency alert on his phone.

A water main had burst. People were in trouble.

Everyone at his site was safe. Good.

So they grabbed what they always keep around—water pumps that can “dewater” a trench like a giant vacuum—and headed to the scene. They arrived to confusion, but went to work right away.

They got on their hands and knees to dig out the 12 by 20-foot trench, doing their best not to cause another cave in. Alone at first, then with Boston Firefighters, Police and EMTs.

It had gone from a rescue to a recovery mission. And there was still very real danger.

The bodies of Robert Higgins, 47, and Kelvin Mattocks, 53, were pulled from the trench at about 8 p.m.

Higgins and Mattocks worked for Atlantic Drain Services, a contractor that before the incident had received citations for workers lacking oxygen underground and for conditions that could lead to cave-ins. OSHA is investigating the deaths.

“This was a complete team effort–the entire crew from Boston Water and Sewer—once they arrived, they never stopped working tirelessly together for nearly eight hours,” said O’Brian. “Also the brave firefighters working with us side by side—the EMTs, police, everyone involved—to assure no one else was injured, and to recover our fellow workers with as much respect as possible. Special thanks go out to John Greeley, Abby Rodriguez, Adilino Fernandes and Barbara Gillis.“

Local 100 members were able to cap the bursting pipe and installed a “trench box” to prevent another cave in. Working methodically, they were able to recover the bodies.

“Amidst this great tragedy is great pride,” said Conigliaro. “I’m extremely proud of our IAM members at Boston Water and Sewer. Their quick action, skill and dedication made it possible for all the other responders to do their jobs safely after this horrible accident. That is what unions fight for—jobs that are safe and pay fair wages.”

“Decades of struggle by unions and working people have improved working conditions and made jobs safer, but tragedies like this remind us there is still much work to be done,” said District 15 Directing Business Representative Juan Negron. “Every worker has the right to go to work knowing they will return home to their families, safe and sound. My thanks and deep respect go out the members of Local 100, who worked tirelessly to assist in this difficult effort.”

“I am so extremely proud of these members—the entire Local,” said District 15 Business Representative Mike Vartabedian. “They are nothing less than heroes for working carefully to ensure that these two workers were given the utmost care during the recovery effort. I’m proud to call them my Brothers and Sisters.”