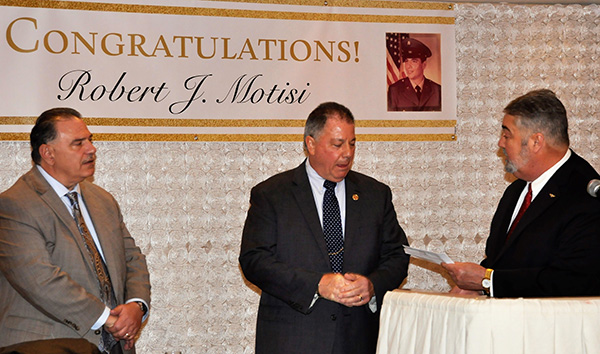 Motisi, retired Business Manager of Local 447, 40-year IAM member, and journeyman mechanic, joined the IAM after going to work for United Parcel Service (UPS) in New York City, before transferring to the Queens garage where he would meet Jimmy Conigliaro.

“I was fortunate to be mentored by former Directing Business Representative John Scarfi,” said Motisi. “Jimmy [Conigliaro] and I both came up through the ranks together under John, and we developed a lasting respect for one another. He’s a true brother and friend in every sense of the word.”

Robert Motisi will tell you everything he is, the person he is, he owes to his mother and father.

“The only way I can describe them to you without choking up,” Motisi told those gathered in his honor. “Is The Waltons.”

However, he is quick to credit his wife, Angel “as the glue that kept it together,” for her patience during the sacrifices of traveling, late nights, missed events and holidays. Motisi’s wife was presented with a spray of flowers in honor of her contributions to his IAM Career.

“It gives me great pride to help honor him tonight,” said Conigliaro. “Countless men and women live better lives today because of the work he’s done over the years. We worked side by side for most of those 40 years, and I’m honored to call him friend and brother.”

Conigliaro announced that the fund will provide five $2,000 scholarships to eligible children and grandchildren of District 15 members this year.

“I am fortunate to be able to participate in this event to celebrate a great IAM leader,” said IAM International President Bob Martinez. “Robert Motisi’s good work will always be valued at Local 447, and across our union.”

During the event, Martinez presented a $5,000 check for the John Scarfi Scholarship Fund in Motisi’s honor.

District 15 members and family can learn more about the scholarship fund by clicking here.