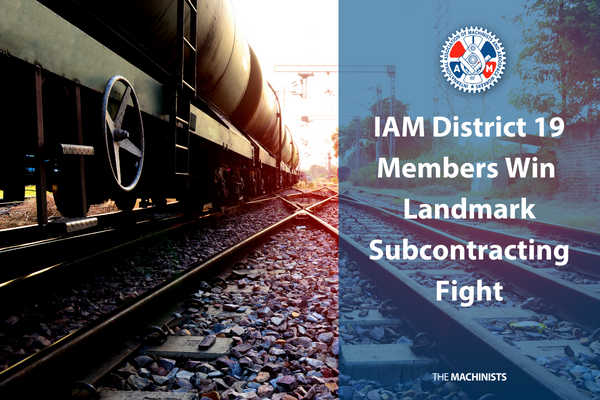 After years of hard work and dedication, IAM District 19 was able to win 400 hours of straight-time pay for IAM members at North Little Rock Union Pacific – Jenks Shop (NLR). The award is due to the carrier’s wrongful subcontracting of IAM work.

The carrier subcontracted out two engine overhauls that were to be done at NLR. The local team stepped into action and gathered the necessary information to progress two great claims. Their hard work was then turned over to District 19 where two claims were filed.

After a long battle with the carrier, it was finally set to be heard by a Public Law Board. In July of this year, District 19 was finally able to present this case to the board. The board ruled in the favor of the Fighting Machinists, awarding members listed in claims 400-man hours at the straight time rate of pay. This gives each member in the claims an estimated $400.

“This is a tremendous victory for our members,” said Josh Hartford, IAM Special Assistant to the International President for the IAM Rail Division. “My thanks go out to Local Chairman Robert Roush along with his team, General Chairman Kenny Krause, and retired General Chairman Jim Davis.”

“Not only did this award give our members much-deserved money in their pockets, but it also gave us some language that states that we own the engine overhaul work at North Little Rock Union Pacific,” said IAM District 19 General Chairman Kenny Krause. “This is definitely in our favor should the carrier try to take on the Fighting Machinists again with this issue.”