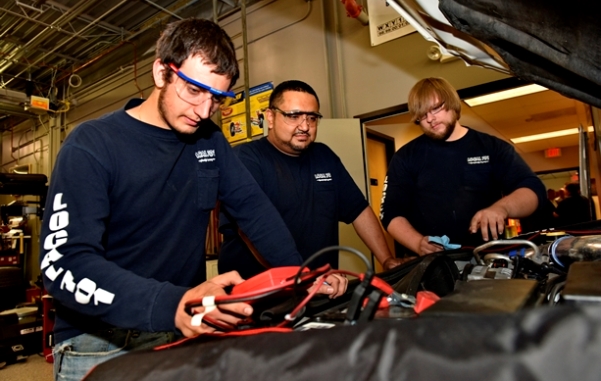 IAM Local 701 is leading the charge to demand Illinois auto mechanics are paid fairly for warranty repairs. Legislation fought for by Local 701, which would force manufacturers to compensate dealerships at a higher pay rate for all warranty repairs, was recently passed by the Illinois House.

The legislation, introduced by Illinois State Rep. Larry Walsh, an IAM member, is now expected to go to a vote in the Illinois Senate by May 31.

“This legislative change would not only force the manufacturers to compensate the dealerships the retail rate of pay for all warranty repairs, but it would also drastically change how our members working at automobile dealerships are paid for doing warranty work,” said IAM Local 701 Directing Business Representative Sam Cicinelli. “This is a game-changer for the industry.”

More than three years ago, Local 701 became aware of California and Wisconsin changing their franchise agreement laws on how manufacturers pay automobile dealerships for warranty work. As a result, these states forced manufacturers to compensate dealerships at a higher pay rate for all warranty repairs.

Currently, auto technicians are paid in warranty and non-warranty retail rates. The warranty rate is less than the retail rate. For example, if a technician replaces a battery under warranty, the factory pays one hour for the job. Conversely, when a customer brings their vehicle in for a battery replacement not under warranty, the technician would receive two hours of pay. There is a considerable difference in the times and pay.

The decreasing amount of retail duties being performed on vehicles today makes it more challenging to make enough hours in a week. This was one reason technicians went out on strike for seven-and-a-half weeks in 2017. The method of compensation from the factory is unfair.

Local 701 reached across the aisle to the Dealer Association, stating IAM Local 701’s intent to pursue this legislative change, and offered to join in a collaborative effort. Even if the Association wasn’t interested in joining in the IAM’s efforts to change legislation, the union intended to pursue this on its own.

As the renewal of the upcoming agreement came nearer, the Association said it was interested in pursuing this with the IAM. The IAM worked with the Association to draft an agreement that said if it was successful in getting the legislative change, they would, in turn, compensate IAM members for the retail times. The Illinois State AFL-CIO and the Chicago Federation of Labor (CFL) were also recruited to help in this effort.

Cicinelli testified at a contentious hearing amid strong opposition from the Illinois Manufacturers Association and several representatives from a myriad of manufacturers.