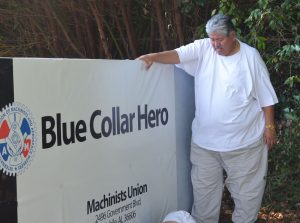 The IAM is saddened to report that 37-year IAM member Alfredo “Al” Granado, a prolific union organizer and champion for working people, has passed away. Granado was 61 years old.

“Al was truly a brother to me,” said IAM International President Bob Martinez. “We came through the IAM together and remained close until the day he passed. He cared deeply about the work he did, and it showed. Al will be truly missed at all levels of our union, and I send my deepest condolences to his family.”

Granado had served as a Grand Lodge Representative in the IAM’s Organizing Department since 2002. At the time of his death, Granado was leading the effort to organize workers at Airbus in Mobile, AL. It was tough work, but as Granado told one reporter, “no one has told us to go fly a kite.”

Granado was a founding member of the IAM’s Spanish Leadership Working Group, and a catalyst for the development of Spanish-language classes at the IAM’s William W. Winpisinger Education and Technology Center.

Granado initiated into IAM Local 776-A in 1979 when he was hired at Lockheed Martin in Fort Worth, TX. He served as his Local’s Vice President and Chairman of the Audit, Trustee, Journeyman and Machinists Non-Partisan Political League (MNPL) Committees. He also served as Vice President of the Texas State Council of Machinists Region III and as a Delegate to the Tarrant (TX) County Central Labor Council.

One of his proudest moments was riding in the motorcade with President Bill Clinton when he visited Fort Worth in 1996.