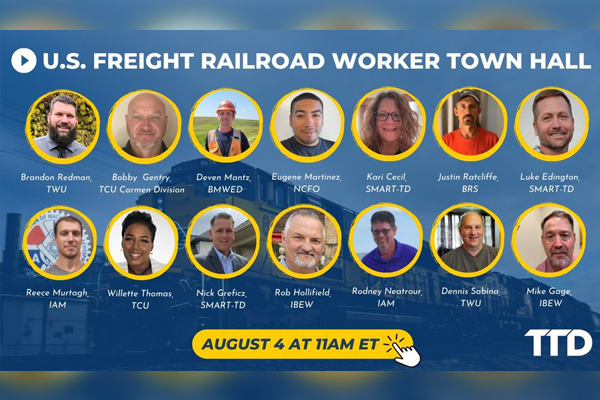 Freight rail workers from across the country shared personal stories and account about “urgent” issues facing the nation’s freight rail system. At the forefront of the issues for rail, workers is the so-called Precision Scheduled Railroading (PSR) a scheme by the railroads that calls for fewer train starts, fewer locomotives, and fewer workers – nearly 45,000 fewer over the last five years.

Calling freight rail workers “heroic,” Redmond said while the railroads demand more with less, workers are saddled with stagnant wages, long hours, health and safety concerns, and quality of life issues, despite increased workloads and a smaller workforce, and strict schedules with little to no time off.

“It’s a hard life,” said IAM member Reece Murtagh. “The conditions we work in – 14 hours, 16 hour days outside in all kinds of weather, tool bags on our backs, walking up and down the tracks, it’s hard on our bodies.”

“I have no personal life,” said Transportation Communications Union (TCU/IAM) member Esmerelda Montelongo. “It feels like home is at work, I literally work 70 hours a week. It’s like we’re not human, they use us until we can’t or until someone gets hurt.”

“While workers are experiencing significant hardships, major freight railroads are earning historically record-breaking profits,” said Josh Hartford, IAM Special Assistant to the International President. “All while failing to negotiate in good faith a new labor contract with the unions. “We’re fighting alongside our members until they get the contract they deserve, with the dignity and respect they have earned.”

One of the main concerns with precision scheduled railroading (PSR) is the detrimental effects that it is having on railroad workers and their safety. For example, mass layoffs are a central component of PSR operations. Fewer workers translate into a railway slashing costs and thus increasing profits.

After two and a half years of negotiations and mediation failed to yield a contract, President Biden appointed a Presidential Emergency Board (PEB) on July 15th to investigate the contract dispute. The Board will issue its recommendations for a fair contract in mid-August. The creation of the PEB forestalls a rail lockout or stoppage for 30 days as the PEB investigates and develops its recommendations.