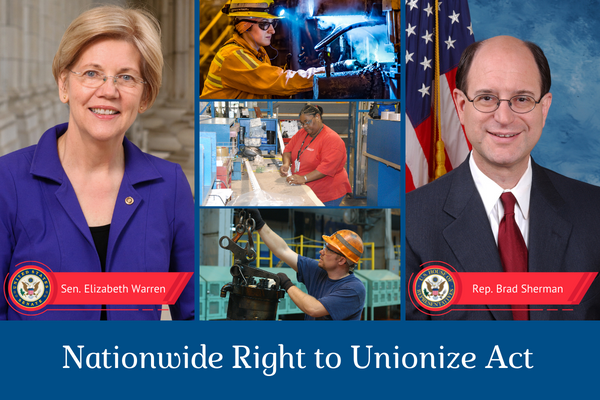 The letter supports the legislation that would ban so-called right-to-work laws that harm workers and suppress wages. Studies have concluded that employees in states with these anti-labor laws average about $11,059 a year less than workers in labor rights states.

Right-to-Work laws make it almost impossible to maintain a union. They force labor representatives to provide benefits to free riders who avoid paying their fair share. This legislation would eliminate the provision of the Taft-Hartley Act which allows so-called “Right-to-Work” laws.

“Republicans and their corporate interest backers have imposed state laws with only one goal: destroy unions and discourage workers from organizing for higher wages, fair benefits, and safer working conditions,” said Senator Elizabeth Warren. “At a time when labor unions are growing in both size, popularity, and delivering real wins for workers, Democrats are making clear that we stand in solidarity with workers everywhere, from Starbucks baristas to Google cafeteria workers and everyone in between.”

“So called ‘right-to-work’ laws are designed to make it difficult to organize a union,” said Congressman Brad Sherman. “This impacts not only workers who want a union – but general wage levels throughout the state. In an ill-conceived effort to attract business, one state after another has adopted these anti-union laws in a race to the bottom. That is why today I’m proud to partner with Senator Warren to reintroduce the National Right to Unionize Act – legislation I’ve introduced in every session of Congress since 2008.”