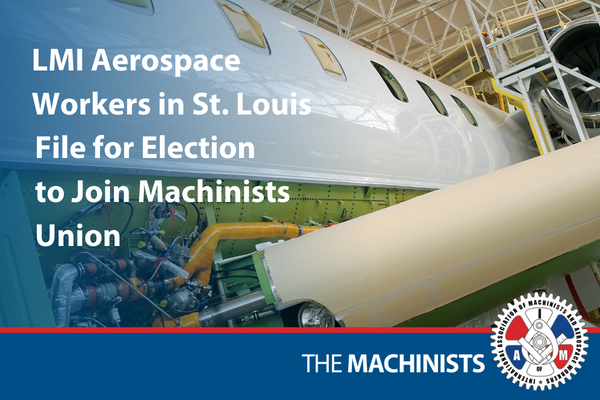 The International Association of Machinists and Aerospace Workers (IAM) has filed a petition with the National Labor Relations Board (NLRB) to represent approximately 50 LMI Aerospace employees in St. Louis.

“Aerospace workers see the value in having a stronger voice in their workplace,” said IAM District 837 Business Representative and Organizer Dan Forbes. “They are machinists and highly-skilled manufacturing technicians who decided to organize because they know union representation will bring dignity, respect, better wages, and benefits.”

IAM is among North America’s largest industrial trade unions and represents approximately 150,000 workers in the aerospace industry, including approximately 2,500 members at the Boeing Co. in St. Louis.

“The IAM has a strong presence in the St. Louis area, and our union is dedicated to fighting for fair contracts for Aerospace workers,” said IAM Midwest Territory General Vice President Steve Galloway. “LMI Aerospace workers want respect and dignity on the job, and the IAM will help them achieve those goals.”

LMI is headquartered in St. Louis and has 13 locations across the United States and Mexico.