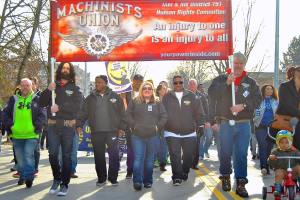 From coast to coast, IAM members marched in solidarity, celebrated and gave back to their communities this weekend to honor the life and legacy of Dr. Martin Luther King, Jr.

“Dr. King understood better than anyone that civil, human and labor rights are one and the same,” said IAM General Vice President Diane Babineaux. “The best way we can honor him is to give back any way we can.”

Machinists Union members giving back to the community at @PatuxentHabitat ReStore in Lexington Park, Maryland for #MLKWeekend. pic.twitter.com/BUMrB55myK

District 70 Members in Wichita, KS hosted a blood drive to help save lives.

IAM members in Wichita, KS gave the gift of life by hosting a blood drive this #MLKDay. #1uMLK pic.twitter.com/XaIcWjxM86

The IAM was proud to march in the @CityCharleston, SC #MLK Parade today. #1uMLK pic.twitter.com/sb78oEFXhl

The IAM also participated in the AFL-CIO’s annual MLK luncheon.