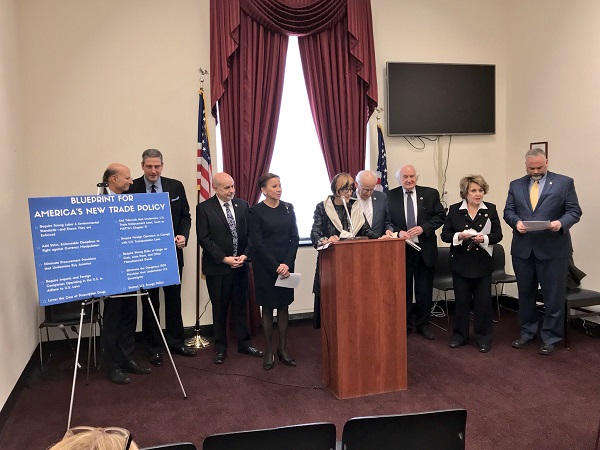 The Machinists Union joined U.S. Rep. Rosa DeLauro (CT-03) and other members of Congress to demand an end to outsourcing and push for strong, enforceable labor standards within a renegotiated NAFTA.

184 Members of Congress recently sent a letter to U.S. Trade Representative Robert Lighthizer stating that low wages, a lack of independent unions, and an inability for workers to collectively bargain in Mexico have led to the outsourcing of good-paying American jobs to Mexico and low wage growth.

“While we are heartened that after all these years that NAFTA will be renegotiated, talk is cheap!” said Owen Herrnstadt, IAM Chief of Staff to the International President and Director of Trade and Globalization. “Negotiators must actively agree to changes, real changes. Changes that make a difference in workers’ lives.”

“Dramatic changes must be made to #NAFTA and a #TPP template will be unacceptable!”- Owen Herrnstadt, Dir. of Trade and Globalization, Chief of Staff to @IAMBobMartinez pic.twitter.com/gprUG6DwSj

We are proud to stand with @rosadelauro and others to lay out a blueprint for America’s new trade policy. #NAFTA pic.twitter.com/UJX7H1Zbhp