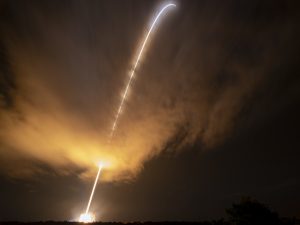 CAPE CANAVERAL, FLORIDA – AUGUST 12: In this handout provided by NASA, The United Launch Alliance Delta IV Heavy rocket is seen in this long exposure photograph as it launches NASA’s Parker Solar Probe to touch the Sun from Launch Complex 37 at Cape Canaveral Air Force Station on August 12, 2018 in Cape Canaveral, Florida. Parker Solar Probe is humanity’s first-ever mission into a part of the Suns atmosphere called the corona. The probe will directly explore solar processes that are key to understanding and forecasting space weather events that can impact life on Earth. (Photo by Bill Ingalls/NASA via Getty Images)

NASA recently launched a spacecraft to the Sun to explore the secrets behind the solar wind’s speeds. IAM members played a huge role in making this mission a reality.

NASA’s Parker Solar Probe will be the first-ever mission to “touch” the Sun and will travel directly into the Sun’s atmosphere about 4 million miles from the surface. At closest approach, Parker Solar Probe hurtles around the Sun at approximately 430,000 m.p.h. That’s fast enough to get from Philadelphia to Washington, D.C., in one second.

“These are the moments that I am in awe of what our Members do, not just in AL and Florida but throughout the U.S. Space Program. Without enough fanfare or praise, it is the IAM Members on the ground who are changing the world in which we live,” said IAM’s Southern Territory General Vice President Mark A. Blondin. “You have the admiration of not just your fellow union brothers and sisters but also from every young boy or girl that looks up in the skies and realizes anything is possible.”