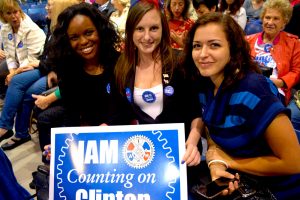 With just a week before Election Day, IAM members are kicking their efforts to elect labor-friendly candidates into overdrive.

And the hard work appears to be paying off. The latest polls show union member support for Donald Trump plummeting in the key battleground states of Florida, Nevada, Ohio, Pennsylvania and Wisconsin.

Trump has said our wages are too high, refuses to bargain with his own hotel workers and buys and makes his products overseas.

IAM-endorsed candidate Hillary Clinton, an honorary IAM Sister, understands the value of collective bargaining, says ‘no’ to bad trade deals like the TPP and will fight for equal pay and programs like Social Security and Medicare.

Besides the presidential election, there’s many important down-ballot races.

If you haven’t registered to vote, aren’t sure where to vote or have any other questions about how to vote, visit RockTheVote.com.

Here’s a look at just some of the many IAM members giving their time and energy this election season:

I put in 8.75 walking miles today, including the equivalent of 84 flights of stairs, canvassing to help elect @PramilaJayapal to congress. pic.twitter.com/7ToxkmnEvY

Go to top
Go to top

IAM members are getting out the vote in Florida w/ @FLAFLCIO this AM. #1uVote pic.twitter.com/fmrszqM0Zx