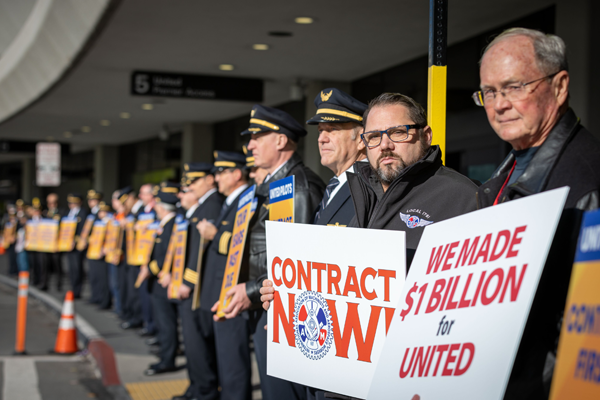 This week, IAM Locals 1871 and 1782 (District 141) members joined AFA-CWA flight attendants and Teamsters mechanics to stand in solidarity with ALPA pilots for an informational picket at San Francisco International Airport. IAM Air Transport General Vice President Richie Johnsen was at the informational picket to show the support of the entire IAM.

“United Airlines is touting how much they’re investing in this company,” said Johnsen. “They haven’t invested in their most valuable asset–their employees. It’s time to take care of your employees.”

The IAM and other unions at United Airlines recently formed a bargaining coalition to strengthen employees’ voices in their workplace and coordinate closely on bargaining and other issues.

Today, front-line union workers at #UA came together at #SFO Airport for an info picket, calling on the #UA to return to negotiating. IAM Members on the West Coast stood in #SOLIDARITY w/ @ALPAPilots @afacwa @iamairtransport @Teamsters to create a rock-solid, unified front. pic.twitter.com/TNeQaDAeb2