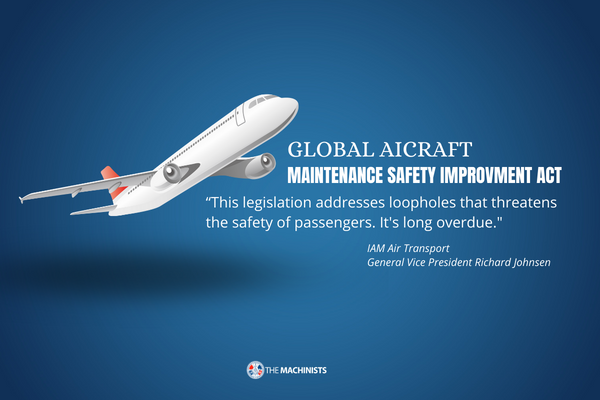 The IAM, the largest airline union in North America, representing over 100,000 airline workers, signed onto a joint letter supporting the legislation that was introduced by Transportation and Infrastructure Committee Chairman Peter DeFazio (D-OR).

The committee approved the bill in June, setting it up for full House floor consideration.

“The current lack of uniform regulatory standards and oversight sets an unlevel field with carriers increasingly enticed by the financial incentives to push this work overseas,” said IAM International President Robert Martinez, Jr. “This results in job losses in the U.S. and risks passenger safety. It’s time to undo this problem and put the safety of passengers first.”

Prior to the COVID-19 pandemic, more than 900 aircraft maintenance and repair stations have been certified by the FAA outside the U.S., which includes countries such as China, Singapore, and Brazil.