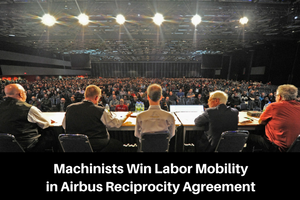 Members of IAM Local Lodge 712 voted overwhelmingly in favor of a new reciprocity agreement on Sunday, as their employer Bombardier, and Airbus, work toward finalizing their partnership to produce the C Series aircraft.

“This agreement will create bridges between the IAM, Bombardier and the new limited partnership once the enterprise is split into separate entities,” explained IAM Québec Coordinator David Chartrand. “What was important to us when the partnership announcement was made, was to sit down with the company and the partnership makes sure that there’s labor mobility, so workers can go work for one company or the other depending upon need. Normally when a business sells or creates a partnership, the workers under the group that is sold, stay in that group and there’s no bridge between the two companies.”

Chartrand added that the letter of agreement will be included in the collective bargaining agreements of both companies, as well as in any future agreements once they are negotiated. Although they are spread over three sites at Mirabel in the suburbs of Montréal, the workers are covered by the same collective agreement, which is due to expire next year. Under the deal with Airbus, the limited partnership created to build the C series will now become responsible for 2,000 employees at the Mirabel plant.

“I want to thank Coordinator David Chartrand and the negotiating team for doing a tremendous job fighting for our membership,” said International President Bob Martinez. “I’m very proud of how our members continue to stick together.”

Under the terms of the C Series deal announced last fall, Airbus will hold 50.1 percent of the new partnership.