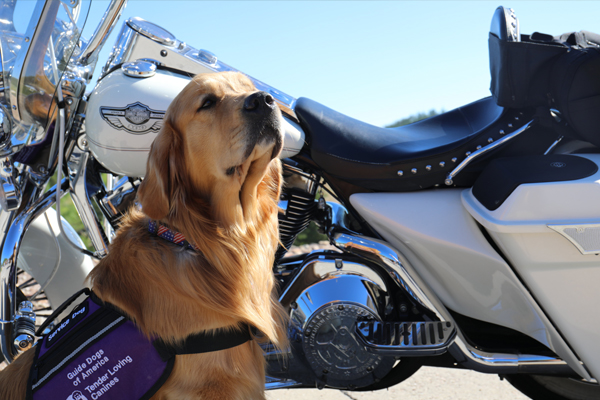 Each rider is encouraged to raise $1,200 to sponsor their ride and all of them either met that goal or beat it, raising a total of $102,500 – the highest total of the Kourpias K-9 Classic’s three-year history to date.

The Kourpias Ride is hosted by a different IAM Territory every year, and this year was the Midwest Territory’s turn.

“We are honored to host the Kourpias Ride, named after the late IAM International President George Kourpias, who hails from the Midwest Territory,” said IAM Midwest Territory General Vice President Steve Galloway. “I want to express my thanks to Grand Lodge Representatives Tony Wickersham and Shannon Stucker, and District 5 Directing Business Representative Jeremy Pearson for their hard work taking the lead in this effort and making it successful.”

On day one of the ride, fundraisers drove 225 miles through Devil’s Tower, Full Throttle Saloon, and Spearfish Canyon. On Day 2, they went 190 miles on Needles Highway, through Custer State Park, and on Iron Mountain Road – a ride that featured the Crazy Horse Memorial and Mount Rushmore. On the third day, they rode 130 miles through canyons to Sturgis.

IAM General Secretary-Treasurer Dora Cervantes and IAM Aerospace General Vice President Mark Blondin also participated in the ride, both for their third year in a row.

“It’s for a good cause. Our whole union has rallied around this cause,” said Cervantes. “GDA provides a service dog to visually impaired people, Veterans with PTSD, and kids who are autistic. I have been raising money for GDA for many years and have witnessed firsthand the new-found life these dogs bring to those who need them. It is worth any and every sacrifice we make to get these dogs to the people who need them.”

“It costs $50,000 to purchase a guide dog,” said Blondin. “Our charity, Guide Dogs of America, provides these guide dogs to people who need them for free: veterans, people with disabilities, children with autism. It is very important to all of us.”

“Thanks to IAM members, districts, staff, families, and friends for their generous donations,” said Galloway. “Thank you for making the Midwest’s Kourpias run an enormous success.”

For more information on these and other IAM Midwest Territory events to benefit Guide Dogs of America, visit the Spirit of the Midwest website at SpiritoftheMidwest.org.

The IAM’s favorite charity, Guide Dogs of America – Tender Loving Canines, transforms lives through partnerships with service dogs for countless veterans, people who are blind/visually impaired, families affected by autism, and facilities in need that depend on GDA’s services every day. To continue to be successful, GDA/TLC depends on the talents, goals, and generosity of dedicated volunteers and donors like IAM members across North America.