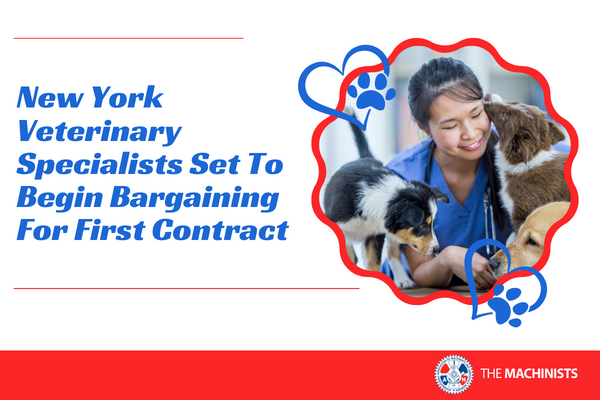 More than 130 workers at Veterinary Specialty and Emergency Services (VSES) in Rochester, NY, are set to begin bargaining for a first agreement. The unit of 130 workers is made up of licensed veterinary technicians, veterinary assistants, front desk staff, and other critical staff.

Some of the significant issues for Veterinary Specialists and Emergency Services workers included unfair working conditions, including understaffing, and stagnant wages despite rising costs for pet medical procedures.

“These brave workers understand the importance of a strong IAM contract,” said IAM Eastern Territory General Vice President David Sullivan. “Now begins the all-important bargaining for a first agreement that reflects their dedication to the employer and their patients.”

“In January 2022, the employees of VSES voted overwhelming for representation by the IAM,” said District 65 Directing Business Representative Ron Warner. “Thrive Pet Healthcare, VSES’s corporate owner, initially chose to fight the election result rather than bargain. The IAM is pleased to announce that Thrive has now chosen to abandon its legal appeals, and the IAM now looks forward to negotiating a fair and equitable collective bargaining agreement for the workers.”

The grassroots organizing campaign was successful in part due to a partnership with Liz Hughston, president of the National Veterinary Professionals Union.