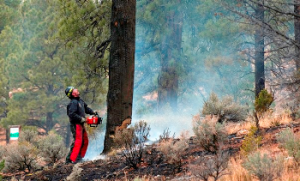 Seasonal firefighters and other part-time federal workers represented by the National Federation of Federal Employees (NFFE-IAM) have finally won the right to fairly compete for permanent jobs in the federal government.

With the signing of the 2017 National Defense Authorization Act, NFFE-IAM members celebrate a victory for temporary and term employees at federal land management agencies and the Department of Defense (DOD).

“These brave women and men who choose to endanger their own lives for the safety of others deserve a level playing field with other federal employees when applying for jobs,” said NFFE-IAM National President Randy Erwin. “We are also very pleased that the same provisions have been expanded to cover temporary and term employees of depots, arsenals, shipyards, and major range and test facilities bases whose work is so critical for the safety of our troops.”

Two of the provisions signed into law expand the eligibility for temporary and term employees to pursue career paths to permanent positions formerly only available to full-time employees.  The new law brings welcomed relief to seasonal and other temporary workers at the U.S. Forest Service, the Department of the Interior, and certain DOD facilities. The workers are now able to include their years of service protecting lives and federal lands when applying for permanent positions.

NFFE-IAM has long been fighting to bring fairness to the federal government’s hiring practices. In March 2016, the union called on President Obama to demand the Office of Personnel Management stop prohibiting eligible temporary employees from applying to vacancies open to all federal employees.

Through the creation of a career path to permanent positions, seasonal wild land firefighters and certain defense workers are now able to include their years of service protecting lives and federal lands when applying for permanent jobs in the federal government.

“This signals a great step forward toward ending a second-class employment status for our nation’s wild land firefighters and defense workers. If you put your time in, it should count,” said Erwin. “NFFE worked hard to ensure the passage of these two valuable provisions, and we will continue to promote solid career paths within the government in order to attract and keep the best and brightest.”